The panel will examine media coverage of Obama through the tumultuous second year of his presidency, including the Democratic losses in the midterm elections, the successful passage of health care reform, the political and social upheaval in the Middle East and the run-up to the 2012 election.

Admission is free and open to the public. For more information, contact the Hofstra Cultural Center at (516) 463-5669.

Robert Siegel, a senior host of NPR’s award-winning evening newsmagazine All Things Considered, joined the program in 1987. As a host, Siegel has reported from Western Europe, Eastern Europe, and Israel. He now concentrates on domestic stories. During the fall of 1992, Siegel took a short leave from the show to anchor Talk of the Nation, NPR’s nationwide live call-in program. Before joining All Things Considered, Siegel served for four years as director of NPR’s News and Information Department, overseeing production of NPR’s newsmagazines All Things Considered and Morning Edition, as well as special events and other news programming. Siegel joined NPR in December 1976 as an associate producer, and was appointed public affairs editor in 1977 and senior editor in 1978. In 1979, Siegel was chosen to open NPR’s London bureau, where he worked as senior editor until 1983.

Mark Jurkowitz is associate director of the Pew Research Center’s Project for Excellence in Journalism and has spent nearly two decades covering the news media. He was the press critic and author of the Boston Phoenix’s “Don’t Quote Me” column from 1987-1994, and again from July 2005 until June 2006. In between, he spent 10 years at The Boston Globe, initially as the paper’s ombudsman and then as its first full-time media beat writer. A graduate of Boston University, Jurkowitz has taught a course on media ethics at both Northeastern University and Tufts University and has been a commentator on media-related issues on outlets ranging from CNN’s Reliable Sources to NPR’s On the Media.

Governor Howard B. Dean III  is a former Democratic National Committee Chairman (2005-2009), Democratic presidential candidate, six-term governor of Vermont and physician. He works as an independent consultant focusing on the areas of health care, early childhood development, alternative energy and expansion of grassroots politics around the world. He also serves as Chairman of the Board of the Progressive Book Club, is a CNBC contribution and founder of Democracy for America. Dean began his career in public service in 1982, and has served as chairman of the National Governors’ Association and the New England Governors’ Conference. He left the governor’s office in 2003 to launch his presidential campaign, during which he launched innovative fundraising strategies, including use of the Internet. In September 2009, he became a senior presidential fellow at Hofstra’s Peter S. Kalikow Center for the Study of the American Presidency.

Edward J. Rollins has long been considered one of America’s premier political strategists and communication experts. He managed President Ronald Reagan’s 49 state landslide reelection campaign in 1984. President, and has had major managerial roles in eight other Presidential campaigns including most recently serving as National Chairman of the Huckabee for President Campaign in 2008. Mr. Rollins has served in the administrations of four United States Presidents (Nixon, Ford, Reagan and Bush; 41) including serving two tours of duty at the highest level of the White House as Assistant to the President. He directed both the White House Office of Political Affairs and the White Office of Intergovernmental Affairs for President Reagan. He was also President Reagan’s Deputy Chief of Staff in the second term. Rollins is a Senior Political analyst for CNN news. In September 2009, he became a senior presidential fellow at Hofstra’s Peter S. Kalikow Center for the Study of the American Presidency.

Hofstra University is a dynamic private institution where students can choose from about 150 undergraduate and more than 160 graduate programs in liberal arts and sciences, business; engineering; communication; education, health and human services;  and honors studies, as well as a School of Law. The University also provides excellent facilities with state-of-the-art technology, extensive library resources and internship programs that match students’ interests and abilities with appropriate companies and organizations.  The Hofstra community is driven, dynamic and energetic, helping students find and focus their strengths to prepare them for a successful future. 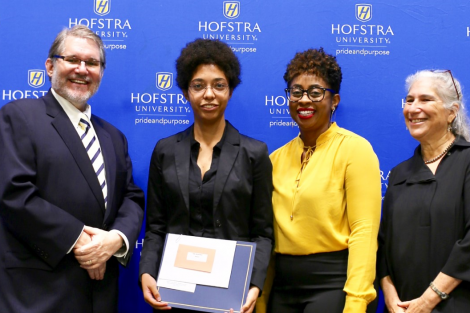 Should Primaries be Postponed?