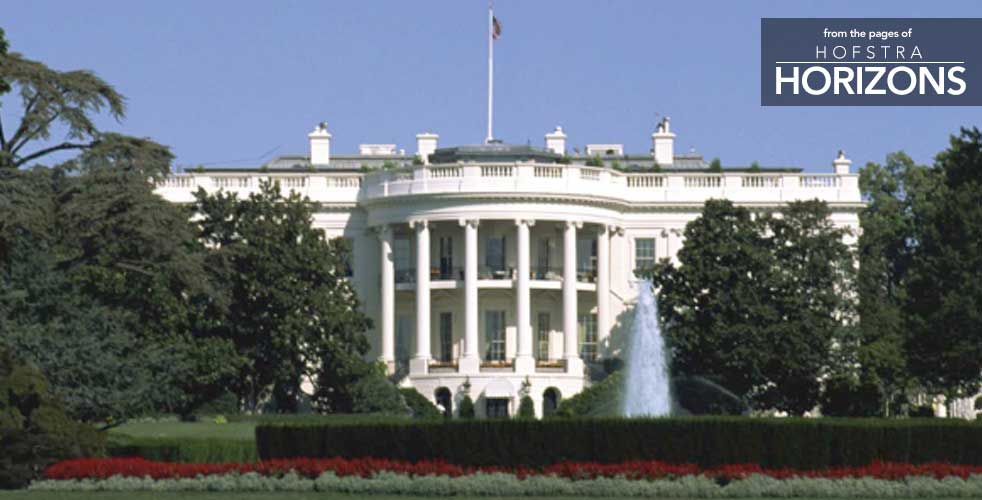 Hofstra’s Irish Studies Program, initiated in spring 2008 by Drs. Gregory Maney (Sociology) and Maureen Murphy (Education), is the ﬁrst such program on Long Island, which is home to more than 500,000 people of Irish ancestry. The program is distinguished by its wide range of course offerings and high level of engagement with and service to the broader community.

In addition to formal courses, the Irish Studies Program organizes:

In 2008 the Fulbright Program, which is sponsored by the U.S. Department of State, awarded approximately 6,000 grants totaling more than $275.4 million, to U.S. students, teachers, professionals, and scholars to study, teach, lecture, and conduct research in more than 155 countries, and to their foreign counterparts to engage in similar activities in the United States. I received one.

My proposal for spring 2009 had two parts: teaching and research. I asked to accept the invitation of the head of the Department of Theology and Religious Studies at Mary Immaculate College of the University of Limerick to teach one module (the equivalent of one three-credit course) on the history of women in Christianity. In coordination with teaching this module, I proposed a study to enlarge and deepen the arguments of my published research about Catholic women deacons.

Despite several ofﬁcial attempts to quash discussion, Catholics are still interested in the neuralgic question of the ordination of women. Perhaps in no other religion is professional ministry by women so hotly debated. Hierarchically organized Christian denominations have three ranks of professional ministers. In the Catholic churches, these clerics, as they are now known, are deacons, priests and bishops.

In Christian teaching, the ﬁ rst deacons were called forth from the Christian assembly by the apostles to supervise the church’s charity (Acts 6:1-6). According to Pope Benedict XVI, himself a historian:

… theirs was a truly spiritual ofﬁ ce which carried out an essential responsibility of the Church, namely a well-ordered love of neighbor. With the formation of this group of seven, “diaconia” – the ministry of charity exercised in a communitarian, orderly way – became part of the fundamental structure of the Church.1

While the orderly ministry of charity did become and remains part of the fundamental structure of the church at every level – from the individual parish to the headquarters of the Holy See at the Vatican – the diaconate did not retain direct oversight of it.

The early church clearly distinguished the functions of priest and deacon, each directly serving the bishop. While the Eastern churches strongly retained the diaconate, it progressively faded in the West, until deacons’ functions became more ceremonial than real. Concurrently, the role of women deacons faded. Eventually the diaconate in the Latin or Roman Catholic Church was primarily the ﬁrst ordained step on the way to priesthood. Priests, in turn, were “attached” to a speciﬁc geographical locale called a diocese, headed by one bishop, or they belonged to a monastery or religious order, whose abbot or superior was effectively the same as a bishop.

From time to time, individual bishops or even church councils called for the restoration of the diaconate, and by the Second Vatican Council (1962-1965) the time seemed ripe for its restoration. As the story goes, when he signed the paperwork authorizing the diaconate as a permanent ordained rank in Catholicism, Pope Paul VI asked an obvious question for anyone who knew church history: what about women deacons?

Intriguingly, the answer he reportedly received has seen only the barest light of day. What is said to be the text of a report made to the pope by a Camaldolese monk named Cipriano Vagaggini was eventually published in 1974 – in Italian – in a small, but highly regarded, academic journal. Yes, he said, there were women deacons, and they were ordained.

Pope Paul VI set out the new rules for the permanent clerical rank of deacon in 1972 in his Apostolic letter Ad pascendum. He did not mention women deacons. Throughout the 1970s, the debate about women deacons raged, centering on two sides, each of which used history as its tool. Those opposed to including women in the newly revived order of deacon said that women may have been called deacons, but were never ordained as such – only “blessed” or “enrolled” or “appointed.” Those who argued in favor of women deacons pointed to historical records, literary references, tombstone evidence, and actual liturgies used by bishops to ratify women as deacons to bolster their case.

Then the women priests debate exploded. Throughout the 1970s, arguments abounded about women’s ordination in many Christian denominations. In the Catholic Church, a Vatican curial offi ce called the Congregation for the Doctrine of the Faith issued a 1976 opinion titled Inter Insigniores (“Declaration on the Question of Admission of Women to the Ministerial Priesthood”), and in 1994 Pope John Paul II sent Ordinatio Sacerdotalis (“On Reserving Priestly Ordination to Men Alone”), an Apostolic letter to the world’s Catholic bishops. Both stated women could not be ordained priests, but each left the matter of women deacons aside. A 2002 document on the diaconate by the International Theological Commission left the question of women deacons open for further study.

While my previously published work relied on theological anthropology, sacramental theology, ecclesiology, canon law, historical and ecumenical sources, and contemporary understandings of the diaconate, this new project focuses on ritual validation of roles for Catholic women, including historical analysis of their ordination, benediction, enrollment, consecration, and profession rites.

Ancient and medieval sources reveal parallel developments of rituals to accept and certify women’s church service. The Apostolic Constitutions, best known for documenting third- and fourth-century liturgies, include formulae for the ordination of women deacons, as well as for the blessing or enrolling of widows, and for the consecration of virgins. The creation of monasteries for women engendered additional ceremonies to ritualize membership and leadership.

In the Latin Church’s first 600-700 years, in different locales, bishops accepted women’s ministry through such ceremonies, variously referred to as benediction, consecration, enrollment, ordination, and/or profession. Increasingly, over the next 800-900 years or so, offi cial church recognition of women’s dedication and ministry took place only within monasteries. But as women’s monasteries grew, so did formalized profession rites for the nuns and consecration rites for their abbesses, whose territorial power nearly equaled that of diocesan bishops. It appears the church originally recognized and authorized abbesses’ juridical and sacramental authority through ordination (sometimes called benediction) as deacon (or deaconess); an abbess’s overseeing role was recognized by consecration. These seem to equate to the ordination of male deacons and the consecration of bishops.2

Concurrently, the Catholic notion of sacrament, and especially of sacramental ordination, continued to evolve, and by the early Middle Ages most women who wished to serve the Church retreated to abbeys and monasteries, following one or another of the ancient rules (e.g., St. Benedict, Carmel) or some of the newer ones (St. Francis, St. Dominic). Women who wished to actively minister outside monasteries joined third orders.

Even so, the role of deacon and, when viewed equivalently in abbesses, the role of bishop, continued to be fi lled by women and ritually acknowledged.3 The rules and rituals of contemporary communities of cloistered women reveal elements common to ancient rituals of ordination, demonstrating the tantalizing probability that ancient ritual was adapted by them in the cloister. That is, the meanings of “ordination,” “consecration,” “benediction,” “enrollment,” and “profession” demonstrate that women’s rituals represented, and represent, what they understood about their status.

Today, particularly in the Benedictine (especially Cistercian) and Carthusian women’s traditions, the ceremonies for profession (permanent membership of a nun in the monastery or abbey) and for consecration of virgin are distinct ceremonies. But some include liturgical elements peculiar to ordination ceremonies. For example, at the time of consecration of virginity, the Carthusian nun receives the stole and maniple – liturgical vestments of the deacon.

What difference does it make?

While superiors of communities of nuns and sisters have certain juridical authority by virtue of their office, no woman has clerical status.4 Jurisdiction – the right of governance – comes with office, and sacramental authority requires faculties granted by the local ordinary (bishop), but each typically requires clerical status. Permission to preach at liturgies and to solemnly celebrate sacraments requires ordination.5

The Catholic Church currently restricts its ordained ministry to men, including more than 35,000 permanent deacons worldwide. Establishing the historicity of women’s ritual and service grounds the ongoing discussions about restoring ordained women’s ministry in the Catholic Church. Such restoration would greatly broaden professional ministerial opportunities for women, and restore the feminine face of Catholicism.

2 Arguments relative to women priests cloud this discussion, and are therefore eliminated. The church sees deacons acting in nomine Christi or in persona Christi servi and priests in personae Christi capitas ecclesiae; the bishop combines the two. Two current magisterial arguments counter the concept of women priests: the iconic argument (priests must physically resemble Jesus) and the argument from authority (Jesus did not name women apostles). Deacons can witness marriages and baptize, as well as bury the dead, preach at liturgy, and hold offices restricted to clerics; only priests (and bishops) may celebrate Mass, absolve, and anoint; only bishops may ordain and confirm, although the latter may be delegated to priests.

3 This is not to overlook the canonical arguments about abbesses’ authority that took place from the Fourth Lateran Council to the Council of Trent.

5 Non-ordained persons may validly perform only baptism and marriage. Aside from the other sacraments, preaching at liturgy is the most restricted of all. Canon 767.1: “Among the forms of preaching the homily is preeminent; it is part of the liturgy itself and is reserved to the priest or deacon.”