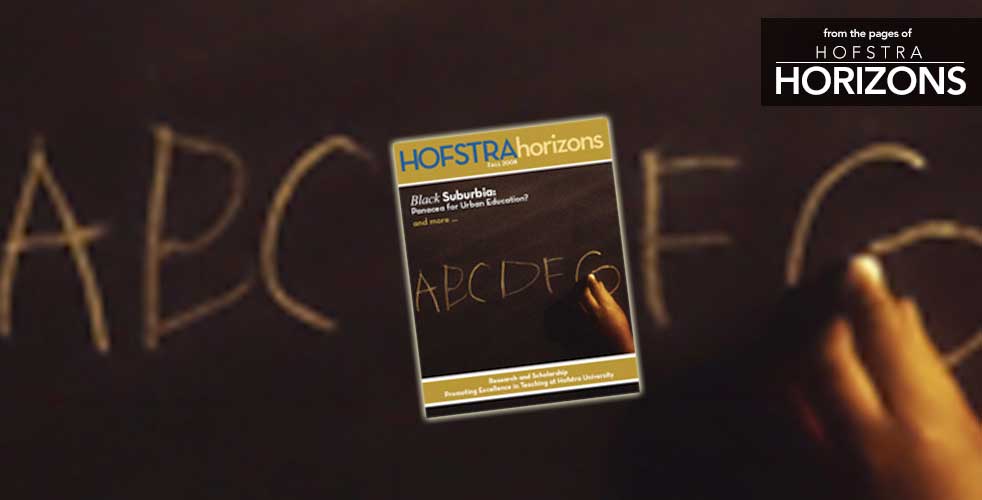 Recent research on the public education of black students in majority minority suburbs has suggested that both their experience in school and educational outcomes mimic that of their urban counterparts (Ascher and Branch-Smith, 2005). The irony is that with the increase of black suburbanization in the past 30 years, suburbia has not met the expectation of its black residents. So although the suburbs are generally viewed as a means for access to a better material lifestyle, and specifically improved schooling conditions and higher levels of academic performance for children and youth, the trend of black suburbanization has not followed suit. Majority black suburbs tend to have the following characteristics:situated close to the central city, few jobs, poor governmental services, high taxes, lower appreciation of residential real estate, and a hybrid mix of low income to moderate to high income households (Alba & Logan, 1993).These spatial characteristics of black suburbia, it has been suggested,translate into differences in school quality (Gosa and Alexander, 2007).

My research and professional activities have been directed toward both examining the educational experiences of black students in majority minority suburbs and providing them with educational enrichment activities that can further better opportunities for their own personal advancement. I am fortunate to have collaborated withHofstra faculty on a few projects that allow me to pursue my research interests.

I have been involved in research with Dr. Eustace Thompson of theDepartment of Foundations, Leadership and Policy Studies, examining student perceptions of academic press in a public school in a majority minority suburb. I have collaborated withDr. Roberto Joseph of the Department of Curriculum and Teaching on a recent grant-funded project with theNew York State Education Department of Teachers Opportunity Corps. This grant addresses teacher quality in underperforming minority schools. It allows the School of Education, Health and Human Services at Hofstra to provide historically disadvantaged students and others committed to teaching in underperforming schools with the rigorous preparation they need to promote student academic success in grades 7-12. The other project thatI am involved in is a collaboration with Dr. Joseph and Dr. Blidi Stemnof the Department of Curriculum andTeaching. This project expressly targets the underperformance of minority girls in the areas of math and science.For this project, we are seeking grant funding to develop socially relevant curriculum for a summer learning academy for minority adolescent girls in majority minority suburbs. Each project is discussed below.

Addressing the quality of education in public schools in majority black suburbs is an under-researched area.Most research on the schooling experience of blacks in general focuses on the achievement gap between whites and blacks. This line of research has attempted to correlate black students’schooling outcomes (i.e., achievement)with their socioeconomic backgrounds,including family status, income,educational level and their attitudes toward schooling. When school settings are discussed in the research literature,the characteristics (conditions) of the school setting are tied to the racial and class identity (also known as student composition) of the youth population that inhabits that particular space. This particular approach has been questioned by several scholars.

In the past year, my colleague,Dr. Eustace Thompson, and I have been working on research that focuses on black student perspectives of their educational environment. Specifically,our inquiry, which emerged from our work with doctoral students, examines high school seniors’ perspectives of academic press in their school environment. Academic press as one factor of school climate is conceived,according to Lee and Smith (1999),from the notion of press in organizational theory. Press, they explain, is “… pressure toward a common purpose from which school members are not expected to deviate.The organization sets a normative environment that motivates its members to behave in desirable ways …” (p. 912).Therefore, academic press, according to Shouse (1997), is based on the following components: academic climate, disciplinary climate, and teachers’ instructional practice and emphasis. Academic press is present when the quality of the teacher,student and school interaction fosters motivation and accountability in vested parties. The school has to offer to all its students a challenging and rigorous curriculum. In turn, students will then work hard to strive for recognition of their academic performance by adhering to school rules designed to promote achievement. Moreover,teachers are engaged and committed to teaching in ways that promote student understanding and foster motivation in students. Teacher practices include creating meaningful assignments and learning experiences and careful monitoring of student progress, relaying assessment outcomes to parents and students in a timely manner.

Our preliminary analysis of the data suggests that academic press was missing within this suburban school. Our student participants reported a school environment that they perceived as lacking accountability and responsibility in providing a quality education. The students described a high degree of uncertainty, which they believed permeated the school climate.The school did not prepare them adequately for college entrance, leaving them to conclude that, in the end, they must shoulder the entire responsibility for their academic success. The student participants explained that the academic program did not provide challenging classes and that a culture was created,as described by one participant, “…that many students knew they could just get by.”

This emerging area of inquiry led me, along with another colleague, Dr. Roberto Joseph, to seek grant opportunities directed toward providing students in majority black suburbs with highly qualified teachers. We are recent recipients of a grant from the New York State EducationDepartment. The grant programTeacher Opportunity Corps(TOC) at Hofstra University aims to increase the number of historically underrepresented,economically disadvantaged, and all other individuals interested and committed to working with students in underperforming school districts. These school districts are unique because,although they are located on suburban Long Island, they are segregated minority communities where the public education mimics the challenges faced in urban/inner city communities. Research suggests that schools in these areas are twice as likely as their white counterparts to have underqualified and inexperienced teachers, and these teachers are more likely to leave the profession or move to a school whose students are “easier” to teach, causing a constant revolving door of novices serving high-need schools(Education Trust, 2005). Recent research also suggests that these teacher transitions are strongly related to student characteristics such as achievement levels, race and ethnicity(Hanushek, Kain, Rivikin, 2004).

The TOC at Hofstra University will address this persistent problem in teacher quality in underperforming districts through the development of one-on-one tutoring between TOCparticipants and students in high-need districts. The TOC at Hofstra will be driven by our theme, Project PROMISE(Promoting Responsive, Optimistic andMeaningful Interactions in SecondaryEducation). Our goal is to implement are search and development initiative framed by a sociocultural perspective on the teaching and learning process,emphasizing the relationship between student and teacher. We will have an overarching research and practice focus on how the identities of both teacher and student are linked to the practices found in their social cultural communities and negotiated in the context of the school and classroom culture. The program will enable both prospective and in-service teachers to examine the interactions between student and teacher and how these interactions influence instruction, with the goal of promoting sociocultural consciousness as the departing point of effective teaching. At the core of our framework is the notion that learning is embedded in the social relation that exists between teacher and student and how both simultaneously interpret and represent each other and the content in the classroom (Nasir and Hand, 2006).

I have also been fortunate to assume responsibility for another grant program funded by Planned Parenthood ofNassau County. This is a social activist intervention program designed to provide safe and educationally rich opportunities for adolescent girls and boys from communities and school districts surrounding Hofstra University. Our goal is to foster the achievement motivation and enhance the performance trajectory of minority students.

The Saturday program, in effect since 2001, has engaged students in a variety of activities, all of which are designed to help pre-teens and teens stay healthy by using a holistic approach that instills values and pride in themselves and their capabilities. The program also works closely with parents and encourages them to be active participants in supporting their children. The program consists of three key initiatives for adolescents, consisting of workshops in music, technology, and healthy sexuality. Additionally, it includes a parent component to encourage positive and supportive interaction among parents and adolescents and to support parent understanding of issues affecting their children, including sexuality and pregnancy prevention.

The Music Mentoring program draws on the volunteer services of high school students with skill in music. Working with these high school peer mentors from Wheatley High School, EastWilliston School District, program participants learn to play instruments and more generally develop their understanding and appreciation of music. Mentors provide private technical guidance/instruction in musical instrument/NYSSMApreparation, support and encourage students, share the positive effects of creating music that mentors have experienced personally, and are an overall positive role model. The program culminates in a concert at the end of the school year. We are very excited that this year the NassauCounty District Attorney’s Office has provided funds to further enhance this segment of the Saturday program.

Additionally, twice a month, the students meet to learn technology skills.With the supervision of the program coordinator, Lisa Collet Rodriguez,students work with visual editing and creation programs and HTML editing software, which allows them opportunities for developing a Web site,using Photoshop and other programs for visual displays, and editing and linking video clips. As part of the technology initiative, students use technology to conduct research with their peers and participate in discussions about themselves, their communities, selfexpression and self-image.

A third project that I have been working toward, in collaboration with Drs. Roberto Joseph and BlidiStemn, is submitting proposals to fund the creation of socially relevant curriculum in the areas of math and technology. Specifically,our effort is focused on providing enrichment in math and technology for minority girls. While math and technological literacy are of critical significance in our advancing information age, especially as an indicator of college eligibility,research has documented that low income minority girls (AfricanAmerican, Caribbean and Latina)are, as a group, the least likely to engage in course work in these areas that promote higher-level thinking during their K-12 school experience (Cooper, Cooper Jr.,Azmitia, Chavira and Gullatt, 2002).

Research in the area of mathematical and technology proficiency among low income racial minority girls has also noted that gender disparities are generally found as students move toward more advanced levels of study.Indeed, Leder (1992) reported that low income and racial minority girls begin to lag behind in mathematics in the late elementary years. So despite the gains that the National Assessment ofEducational Progress (NAEP) – which is a basic skills examination – has reported from the period from 1973 to 1992 for racial minority girls, there still continues to be a significant gap in mathematics proficiency as compared to their white counterparts.

In conclusion, my goal is to provide transformative experiences for minority youngsters that can improve both their academic and personal developmental trajectories. It is my intention to continue to build upon these projects by connecting with various partners who share a commitment to the improvement of the lives of minority youngsters.

People See Shapes, Computers Compute Shapes
Diversity In and Out of the Classroom