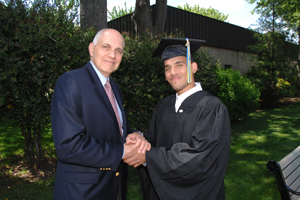 When Otis Scerbo crossed the stage at Hofstra’s May 2007 commencement to shake the hand of Hofstra University President Stuart Rabinowitz, there were few in the audience prouder than Richard Iannuzzi.

Richard ’75, a longtime teacher in the Central Islip School District and a statewide union leader, was teaching fourth grade in the ’90s when he met a troubled boy from a single-parent family and became his mentor. Over the years he guided him, helping him walk a path from the streets of Central Islip to the graduation stage at Hofstra University, where Otis received a B.S. in education. He plans to become a physical education teacher.

“I felt like I had to respect Mr. I,” says Otis, using his nickname for his favorite teacher. “He was the first person other than my parents who cared for me, and I took that to heart. He really made a difference.”

Richard says he knew that Otis had the potential to achieve. “He was a young boy with more than his share of difficult situations, and I just knew that he needed that extra bit of attention and mentoring to succeed. I have so much pride in him to know that he had overcome so many hurdles and was able to graduate.”

Richard says he learned early on at Hofstra just how important it can be to have a mentor to help guide you. In his case, that included his adviser, Mary Anne Raywid, professor emerita of foundations, leadership and policy studies.

“Even with the greatest love and enthusiasm for teaching, you need someone to turn to, who can help you put it all within a frame of reference,” he says. “Hofstra was an important part of that support system for me.”

Richard grew up in a labor family, hearing stories around the dining room table about his father’s battles as a union representative in the local printers union. In his first year as a teacher in 1970, he walked the picket line when Central Islip teachers staged an illegal, two-day walkout.

“That was my baptism by fire with the union,” he says, recalling how teachers were penalized two days’ pay for every day they were on strike.

Thirty-seven years later, he heads up New York State United Teachers (NYSUT), the powerful statewide federation representing 585,000 teachers and health care professionals in almost 1,200 local unions. NYSUT is a major lobbying force at the State House in Albany. He was elected NYSUT president in 2005, just one year after he left the elementary school classroom in Central Islip after 34 years. His last 20 years were spent teaching fourth grade.

“The kids at that age are very impressionable and eager to learn,” says Richard, who lives in Smithtown, New York. “It’s a time when they are beginning to be critical thinkers.”

Brooklyn-born and raised, he moved to Long Island in 1970 after earning a teaching degree at Brooklyn College. By 1971 he had enrolled at Hofstra, taking classes toward a master’s degree in education in the evenings and during summer vacations.

He was elected vice president of the Central Islip Teachers Association in 1973, and union president in 1996. Over those years, he gained a reputation as an innovative classroom teacher with patience, a dry sense of humor, and a heart for students struggling to keep pace in the racially and economically diverse district. Sixteen percent of Central Islip students come from families living below the poverty line.

Among Richard’s fourth-grade students was Otis, whom he took under his wing. Their relationship deepened over the next several years. In elementary school, Richard arranged for Otis to attend a summer camp at Peconic Dunes on Long Island’s North Fork, helping him envision a successful life outside the neighborhood where he grew up.

Since leaving the classroom, Richard has turned his focus to professional education issues, statewide policy and the economic well-being of his membership. New York teachers are among the nation’s highest paid and, in a time of rising property taxes, the union is fighting attempts to roll back advances in salaries and benefits gained over the past 30 years. He notes that New York’s top districts have the highest paid teachers and the most challenging curriculum.

“Districts that pay teachers well command the best and the brightest,” he says. “When you look at the performance in the top districts in New York state, you’ll find them to be the top-paying districts.”