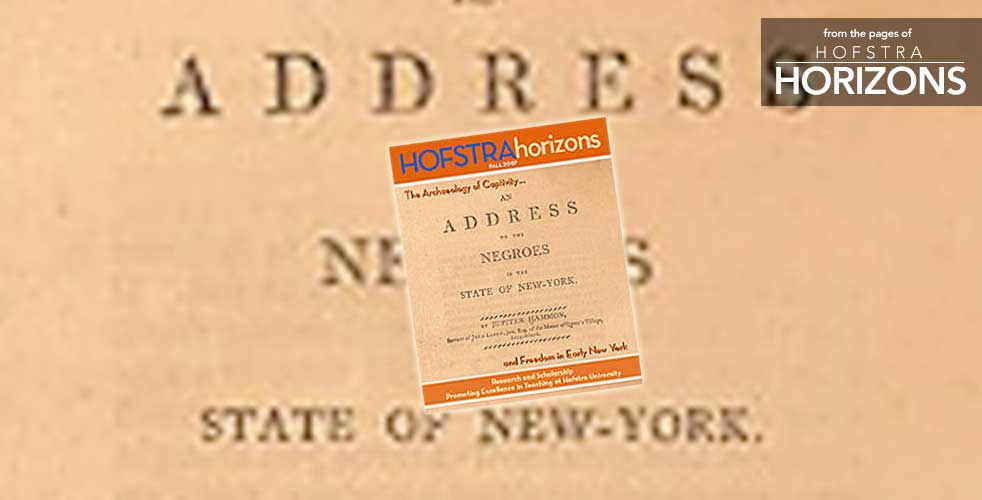 Confined to hospital beds or wheelchairs, children at Winthrop-University Hospital can nonetheless “reach for the stars” thanks to the Astronomy Outreach Program at Hofstra University. Bringing these experiences to hospitalized children not only gives them a new focus, but also allows Hofstra to fulfill its longstanding commitment to community service.

The program at Winthrop is part of the same outreach program that offers community residents the monthly “Stars on Sundays” stargazing opportunities at the Hofstra Observatory atop the Chemistry and Physics Building, which has attracted many families since its inception. As coordinator of the program, I often witness the joy and wonder of the children as they gaze through a telescope at the rings of Saturn, the moons of Jupiter or the craters on the Moon. That prompted me to expand the program beyond the campus and to bring this experience to children who are not able to travel to Hofstra.

Over the years, I was able to secure two NASA grants that now allow Hofstra to bring the Moon, the stars, and the planets to children at the Hagedorn Pediatric Inpatient Center at Winthrop and to children and their families at the Ronald McDonald House on the grounds of Schneider Children’s Hospital.

“We at Hofstra are all excited about the Astronomy Outreach Program as a part of Hofstra University’s effort to serve the community in which we live,” said Harold M. Hastings, Ph.D., chair of the Department of Physics and Astronomy. “It is especially rewarding to see the reaction on children’s faces when Don shows them the planets, the Moon, and other objects through a telescope. We are also appreciative of the NASA funding that Don has secured to help support our outreach activities.”

Our collaboration with Winthrop began in 2006 when I volunteered to combine my “Telescope Observations and Demonstrations for Hospitalized Children” presentation with Winthrop’s Child Life Program. Our partnership has proven to be very successful and was awarded a $50,000 grant from NASA’s Initiative to Develop Education Through Astronomy and Space Science (IDEAS) program in 2007. The grant has afforded us the opportunity to purchase demonstration equipment and materials for our hands-on astronomy programs, which have even included some edible activities. Together, we feel that this hospital-based astronomy program has had and will continue to have a positive impact on the lives of hospitalized children.

The Hagedorn Pediatric Inpatient Center at Winthrop-University Hospital, located in Mineola, New York, is the largest children’s hospital on Long Island, with state-of-the-art care for children’s medical, surgical, psychiatric and dental needs. They serve a population of more than 5,000,000 people. Although I have been conducting similar outreach programs for the last 10 years, there are different challenges in running a hospital-based astronomy program. At Winthrop, I have created three separate programs, each tailored to the children’s illnesses and their levels of mobility. The first group consists of children and their family members who are able to take elevators to the hospital patio to look at the stars. A second group of children can leave their hospital rooms for the nearby play room and can use a computer and a telescope to gaze at the stars through the room’s large picture window. The third group consists of children who are not able to leave their rooms and may be confined to their beds. By using a table-top, portable telescope, hand-held demonstration equipment and computer access, these children also are able to look at the Moon and planets and to enjoy astronomy while satisfying their curiosity.

Ann Marie DiFrancesca, director of Winthrop’s Child Life Program, said that the program’s goal is to provide therapeutic, educational and recreational activities that help children cope with their illnesses and their time in the hospital. Although there are a variety of programs for children, such as art therapy, music therapy and horticulture therapy, this astronomy program is unique because it is sciencebased and not typically available in a hospital setting.

“We in the Child Life Program are excited to be able to provide our children and their families with this unique learning experience. This is an exciting opportunity to learn about science, explore telescopes and handson experiments, and take their minds off their illness,” said Ms. DiFrancesca. “We look forward to being trained to use the telescope and the planetarium.” The staff at Winthrop-University Hospital is being trained to conduct the astronomy program on clear nights or whenever it is convenient for the children and staff. Joe Donnelly, a Hofstra student and a volunteer with the program, said he feels that the astronomy activities help to relieve some of the children’s fears and anxiety.

I have also arranged to bring an inflatable, wheelchair-accessible planetarium dome and digital projection system to Winthrop-University Hospital to show 3-D movies, astronomy sky shows, constellations and eclipses to the children.

The Winthrop program is the latest in a series of astronomy outreach efforts by Hofstra, and it’s amazing to see how much our efforts have evolved throughout the years. I began this outreach effort about 10 years ago with a program for hospitalized children and their families at the Ronald McDonald House of Long Island in New Hyde Park.

Since astronomy has always been one of my passions, I wanted to find a way to bring to others in an educational but fun way the joy and wonder I have always experienced when gazing at the stars and planets. I thought the Ronald McDonald House, which provides housing for the families of children at the nearby Schneider Children’s Hospital, would be an ideal place for a program that can transport participants to distant reaches of our solar system and beyond, and help take their minds off the serious health issues with which they were dealing. I received enthusiastic support from the administration and, with their approval, I soon found myself at the facility with a portable telescope wearing my glow-in-the dark sky-map T-shirt. The telescope program was an immediate success with the children and their families, so much so that they wanted to stay out all night gazing at the stars. I received a $44,500 NASA grant in 2005 to purchase a telescope for the facility and to train the staff there to use it.

This is not an unusual reaction to gazing at the stars and planets for the first time. This is something many of us have seen only in books or on TV, and the clarity of the images and the realization that you are gazing at the real thing often brings disbelief from children. Of course, I quickly learned that Hofstra’s Astronomy Outreach programs appeal not only to children but to people of all ages and backgrounds. The telescopes used for the program are equipped with built-in star maps, a GPS tracking system and a high-powered lens that help bring stargazers to the stars.

The language of astronomy speaks to all, which is another reason for the program’s success. I have met many families throughout the years, some of them from foreign countries, and gazing at close-up images of the Moon, Jupiter and Saturn elicits a universal interest and excitement. I always enjoy explaining to people how the 12″ Meade go-to telescope works, how the mirror magnifies and inverts their images, and how to set up the telescope. The telescope is motor driven, and computer controlled with a built-in star map, and contains a GPS chip to set the telescope with the correct time, date, latitude and longitude.

With this telescope, the children have been able to see the Moon and its lunar craters, Saturn’s rings and satellites, Jupiter’s satellites and colored atmospheric belts, Martian polar caps, stars and star clusters. On a clear night, I help the children to take digital images of the Moon and planets. During the day, we look at the Sun to see sunspots and solar eruptions with a special solar filter.

When it is cloudy or rainy, I use robotic Internet-controlled telescopes in Spain, Chile or Australia so that the children can observe the sky in real-time. They can even take images with the remote telescopes. Indoors, I use flashlights to make constellations and a radar gun to illustrate speed. We have fun making a telescope out of cardboard tubes, a spectroscope from old CDs, a sundial from a toilet plunger, and a solar system scale model from toilet tissue and apples. We also play with astronomy toys and games. These activities offer children a fun way to learn.

Speaking of fun ways to learn, one of my more popular programs with kids involves interesting and edible activities that children can easily relate to in order to understand the science of the universe. I encourage all educators to use these simple demonstrations below to engage their students.

Demo 1
Chocolate, candy, and marshmallows to demonstrate different densities and the formation of the planets (including Pluto, now a dwarf planet).

Demo 2
Chocolate chip cookies with M&Ms to demonstrate the Big-Bang and the expansion of the Universe.

Demo 3
A thick layer of powered chocolate on top of heated milk to demonstrate continental drift and lava flowing through the cracks in the Earth’s crust.

Demo 4
Water with a few drops of milk to illustrate light scattering and why the sky is blue. This also shows why the Sun’s true color is NOT yellow, but white or greenish white.

Demo 5
Popcorn to demonstrate radioactivity and radioactive dating to show how we determine the age of rocks, fossils or stars.

Demo 6
Hot chocolate with a thermometer to demonstrate the temperature change of Earth when it is heated by the Sun (measures solar radiation).

Demo 7
Large spherical cakes that we dip in chocolate and vanilla frosting (like a spherical black and white cookie) to illustrate the lunar phases.

Demo 9
Melted chocolate poured over cake to illustrate mud flows that have occurred on Mars.

Demo 10
Star-shaped cookies with different colored frostings to illustrate that stars have different colors. This is combined with light bulbs and images of real stars.

Hofstra’s Astronomy Outreach Programs at the Ronald McDonald House of Long Island and at the Hagedorn Pediatric Inpatient Center at Winthrop-University Hospital have been very successful both for those institutions and for Hofstra University. They have helped hospitalized children and their families by lessening the stress of the hospital experience. My ultimate goal is to expand this program into a regional and, ultimately, a national astronomy outreach program for special needs children and their families. 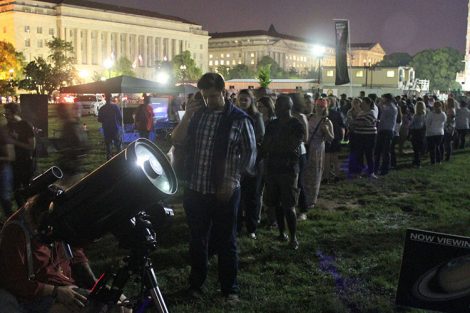 DC Under the Stars

Peering Into the Future of News
Entropy, Quantum Information and Entanglement