The calendar year 2005 will be remembered as one of the most successful athletic years in Hofstra history. Four Pride teams – Wrestling, Softball, Men’s Soccer and Women’s Soccer – won Colonial Athletic Association championships, and two other teams – Women’s Lacrosse and Volleyball – were regular season conference champions. In addition, all of Hofstra’s teams advanced to CAA Playoff competition in 2005. The Pride also boasted numerous All-America, All-Region and All-CAA selections and had several teams ranked in the national polls. 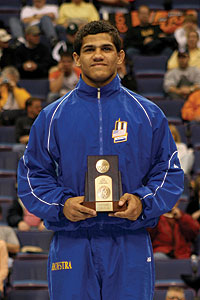 Jon Masa from the All-America stand at the NCAA Wrestling Championships.

The Wrestling team claimed Hofstra’s first CAA championship of the year as it had seven individual champions and two second-place finishers, all of whom advanced to the NCAA Wrestling Championships in St. Louis, Missouri. Jon Masa fared the best in St. Louis, as he earned All-America honors after placing third at 149 pounds and led the Pride to a 17th-place team finish. Masa also earned CAA Wrestler of the Year accolades, while freshman Charles Griffin was the CAA’s Rookie of the Year. Paul Siemon was the CAA Wrestling Scholar-Athlete of the Year, and Tom Ryan took home his fourth consecutive CAA Coach of the Year award. The Men’s Basketball team also heated things up in the winter, posting a 21-9 record and earning an invite to the postseason NIT. Antoine Agudio earned the CAA Rookie of the Year award, while Loren Stokes earned All-CAA and All-Metropolitan New York accolades. The Women’s Basketball team advanced to the CAA quarter finals, but fared much better during the summer 2005. Coach Felisha Legette-Jack served as an assistant coach on the gold medal-winning USA Basketball U19 World Championship squad, while Cigi McCollin and Vanessa Gidden led the Long Island team to its first gold medal in 20 years at the Empire State Games. In addition, Lizanne Murphy played for Team Canada at the World University Games in Izmir, Turkey.

The Softball team continued its strong play by winning the CAA Championship for the fourth consecutive year and its eighth straight conference title dating back to the America East Conference. The team then proceeded to knock off perennial Pac-10 power Arizona State at the NCAA Regionals to advance to the regional final for the second season in a row, setting a school record for wins in a season (43) in the process. Lisa Wambold and Callie Osborne, respectively, earned the CAA Player and Pitcher of the Year awards, and along with Ashley Lane, Hailey Clark and Stefanie Kenney, were named to the NFCA Louisville Slugger All-Mid-Atlantic Region team. The Hofstra coaching staff, led by Bill Edwards, was named the Mid-Atlantic Region Coaching Staff of the Year by the NFCA for the third consecutive season. The team also excelled in the classroom, finishing 20th in the nation in team GPA. The Women’s Lacrosse team, which ranked 14th in the nation, seemed poised to join Softball as an NCAA Tournament team, but after dominating the regular season with a 6-1 conference mark (13-3 overall), the Pride lost in the CAA championship game. Bridget Eder became the program’s first-ever first team All-American after earning the distinction from the IWLCA. Becky Thorn also earned All- America honors as she was named to the IWLCA third team. Eder, Thorn and Kim Hillier were also selected to the IWLCA All-North Region team. In addition, Eder was named the CAA Defensive Player of the Year, and Coach Shelley Klaes- Bawcombe was the CAA Coach of the Year.

The Men’s Lacrosse team was a CAA semifinalist in 2005 and finished the year ranked 20th in the nation. Brett Moyer earned USILA All-America second team and CAA Defensive Player of the Year accolades, while Mike Unterstein was honored as the CAA’s Rookie of the Year. The Baseball team ended a seven-year postseason drought by qualifying for the CAA Championship. Ricky Caputo and Josh Stewart earned ABCA/Rawlings All-East Region accolades at the conclusion of the season. In Men’s Tennis Nicola Djordjevic earned All-CAA first team accolades, and was also named the CAA Men’s Tennis Scholar-Athlete of the Year and was selected to the ESPN The Magazine/CoSIDA Academic All-America team. The Women’s Tennis squad also performed well in the classroom, as it was one of only 83 programs to receive ITA All-Academic Team honors.

Hofstra’s fall campaign was successful across the board as all six sports programs had winning seasons. Men’s Soccer and Women’s Soccer both earned CAA Championships and advanced to the NCAA Tournament. It was the second consecutive title and NCAA trip for the men, while the women’s team earned its inaugural championship in Coach JoAnne Russell’s final season with the Pride. Edel Malone was named the CAA Women’s Soccer Rookie of the Year, while Sara Weber earned the CAA’s Defensive Player of the Year trophy. Men’s Soccer ranked 13th in the nation in the final regular season poll of the season. The two programs also saw each one of their star players earn Academic All-America honors as Michael Todd was a third team selection and Chrissy Arnone was a second team pick.

The Football team finished the year 7-4 overall in Joe Gardi’s final season at the helm and had 11 All-Atlantic 10 selections, while the Volleyball team won the regular season CAA championship, but lost in the CAA semifinals. Shellane Ogoshi was the big winner at the CAA Volleyball Awards Banquet, as she garnered CAA Player and CAA Setter of the Year accolades. The Field Hockey team advanced to the semifinals of the CAA Championship and saw four players – Kara McEneaney, Doni-Melissa Jantzen, Pemba Ramdoo and Jessica Cowperthwait – named to the All-Mideast Region team.

The Hofstra Women’s Cross Country team, led by freshman sensation Mary Sullivan, enjoyed a successful 2005 campaign by winning two of seven meets and finishing in the top three in five meets. Sullivan placed second at the CAA Championship to earn All-CAA accolades. The Pride Men’s Cross Country team participated in seven meets in 2005, winning two and placing second in two and third in one.

While 2005 can be considered nothing less than a success, all of Hofstra’s athletic teams continue to aim high and will look to improve even more in the coming years.