First-Year Connections (FYC), which is all about helping freshmen make a smooth transition from high school to college, is in the midst of its own transition. 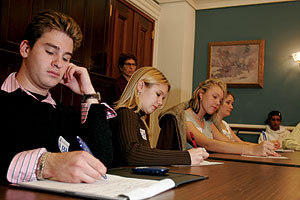 FYC students have the opportunity to take “Connections Clusters” and “Connections Seminars.” In Connections Clusters, students take courses in different disciplines, but they are interrelated and designed to complement each other. These might include “This Great Stage” or “Citizenship and American Democracy.” By fulfilling assignments that may satisfy more than one course requirement, students see how different subject areas complement each other.

In Connections Seminars, students work one-on-one with a faculty member on a research project in a specific area of interest. Examples include “Deception and Romance in Shakespeare” and “Astrobiology and the Search for Extraterrestrial Life.”

In addition to directing FYC since 1999, Dr. Terry Godlove is a professor of philosophy and religion at Hofstra, and he also conducts research in those areas. Dr. Godlove was named associate dean of the program in fall 2005.

Asked why he got involved in the FYC initiative, Dr. Godlove replied, “Two things. I was part of a program like this as a student myself and found it a hugely important experience for me. Second, I know clustering is very successful in lots of places, so I felt it was something at least worth trying at Hofstra.” There’s the vulnerability of new students, both academically and socially. “Academically, college courses are harder than those in high school,” he added, “and time management is a huge issue. Socially, it’s often sink or swim.”

Thinking back to the first FYC he oversaw in 1999, Dr. Godlove said, “The program was very small then, 105 students – 45 in three seminars and 60 students taking three clusters.”

Professors in the FYC program see their students several times a week. “If a student is absent [from a given class] three times in a row,” he said, “Campus Life staff gets in touch with him or her right away,” to make sure there is not a serious underlying problem.

Political Science Professor Rosanna Perotti said, “In 2004, 12 of 35 students in my cluster came to me for advisement because they knew me. Without this program, they may not have received the help they needed. That doesn’t mean that students no longer have problems,” she added, “but it does mean that somebody is more likely to notice problems, in attendance or attention, for example.”

Sabrina Stein, Class of 2007, looked back on the FYC program as “an absolutely amazing experience.” Recalling “the dramatic transition” from high school, she said, “Having classes that are smaller and connected to each other in a common theme really enabled me to learn more.” Having the same group of students in each class “helped my social life,” she added.

Stein, a marketing major, continued, “The two philosophy classes I took in a cluster with psychology and English composition were so interesting that I decided to pursue philosophy as my minor. Touching on the importance of advisement, Stein said, “Professor Godlove became my academic adviser and helped calm my anxiety about college classes and what future classes to take.” 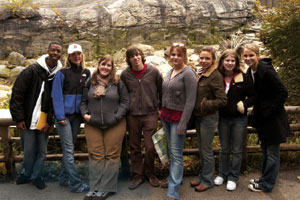 A weekend safari to the Bronx Zoo last spring was just one of many excursions that first-year students enjoyed in 2004.

FYC’s innovative interdisciplinary curriculum is seen as the ideal introduction to the liberal arts. Moreover, no matter which school at Hofstra students select for future study, their FYC courses will count toward their degree requirements. Freshmen typically enroll in four or five courses in their initial Hofstra semester. FYC’s thematic approach enables students to link three of those courses. To illustrate their interdisciplinary focus, Dr. Godlove singled out a few Connections Seminars, both current and upcoming.

“The Literature and Mathematics of Baseball,” scheduled for fall 2006, will explore not only math in baseball but also baseball in literature. This seminar will include a trip to Yankee Stadium – which, he observed wryly, will be tough since he’s a Mets fan.

For “Liberty and Equality in American Law,” taught in fall 2005 by Professor Stan Bernstein (also a federal judge), students worked on projects related to the two recent Supreme Court vacancies, Dr. Godlove noted. That seminar likely will be on the fall 2006 roster. Still other FYC seminars will include two on geology, one on Shakespeare and another titled “Understanding Contemporary Islam,” he added.

For the “Thinking About Art” seminar, Fine Arts Professor Laurie Fendrich and students worked on projects linked to the Ansel Adams exhibit at the Whitney Museum of American Art in 2005. For a Shakespeare class, students went to the Brooklyn Academy of Music for a production of A Winter’s Tale, and then developed a project around that.

To help these seminars and clusters come alive, FYC budgets for relevant off-campus trips, Dr. Godlove noted. For “This Great Stage,” students see Broadway or off-Broadway plays, he said, and a trip to the Hayden Planetarium’s Rose Center for Earth and Space in Manhattan is part of “Science and Science Fiction.”

In fall 2006, as in 2005, FYC clusters will include “Pre-Medical Sciences.” Combining biology and chemistry courses, this cluster is designed to provide a solid science foundation for students interested in medical, dental or veterinary schools.

Professor Perotti, who recently taught an FYC seminar on “The Clinton Presidency” that tied into Hofstra’s presidential conference in November 2005, has found the FYC experience most beneficial. “The small class sizes allow me to get to know the students immediately, including their reading and research interests,” she said. Professor Perotti previously taught a “Pursuing the American Dream” cluster in conjunction with courses in English and economics and will in fall 2006 teach the “Media and American Politics” cluster. She praised the FYC program as “making a huge difference. Students find direction in their first year at Hofstra.”

Professor Ben Talton, who will teach a “Modern Slavery” seminar in fall 2006, recalled a previous seminar, “War and Peace in Modern Africa.” “I had thought I’d be doing a lot of lecturing and that it would be tough to get students involved.” He said the actual experience was quite the contrary. “The students gained confidence and actively participated, making for livelier discussions.” Citing the small classes as key, he noted, “Hopefully, the FYC approach will help students get more excited about history earlier in their academic careers.”