When Hofstra alumnus and Board of Trustees Chair John Miller decided to establish his legacy at Hofstra through a $6 million donation, he thought about where his money would have the greatest impact. He chose Hofstra University Honors College (HUHC). 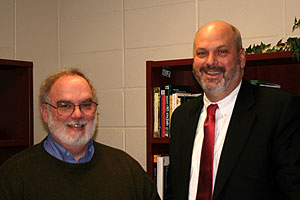 HUHC Dean J. Stephen Russell and Chair of the Board of Trustees John Miller.

“I just think Honors College is something that will help put Hofstra on the map,” said Miller, who earned a B.B.A. at Hofstra in 1979. “I think it has had the effect of elevating the entire University in terms of SAT scores.”

As a Hofstra University trustee emeritus and donor, Ambassador Arnold A. Saltzman had directed funds to help establish Honors College, setting up a residence hall mentoring program for its students and later instituting a lecture program that centers on a State of the Union message.

“It was no secret that [HUHC] would receive students with higher SATs and higher educational aspirations,” said Ambassador Saltzman, now a trustee emeritus of the University. “Since they would spread out among the other students, they would, in effect, raise the whole level of the educational experience at Hofstra.”

Launched in September 2001 with 93 students, the college accepts about 150 students each year. Currently, about 700 students are enrolled there. Supporters say it already has had a positive effect on the University. “Honors College has grown into something very important now, and they’re achieving wonderful results,” Ambassador Saltzman said.

For Christina Cipriano ’05, one of the 73 students in HUHC’s first graduating class, Honors College was a place to grow, an environment that encouraged her to explore different areas of study.

“Honors College was a great learning experience, a truly welcoming and resourceful environment, where I made professional relationships and some of my best friends for life,” said Cipriano, a recipient of the prestigious 2005 Jack Kent Cooke Foundation Graduate Scholarship. She is now pursuing an Ed.M. in international education policy at the Harvard Graduate School of Education with plans to apply to a Ph.D. program in government and social policy. “I believe the most important impact Hofstra University Honors College had was that it allowed me to pursue interdisciplinary independent research. And in giving me the opportunity to pursue my interests, it gave me a path toward a future.”

In some ways, seeing the first Honors College class graduate was the culmination of many years of planning for Dean J. Stephen Russell. In other ways, it is also just the beginning.

“We only just graduated the first class in May,” said Dean Russell, seated in his office in the Axinn Library. “Those 73 students are the only ones out there, and none of them are in the Senate yet. But it’s only been eight months. …”

Still, having graduates who have gone on to the University of Virginia and Hofstra Law Schools, Columbia, Harvard and various other graduate, law and medical schools is not a bad beginning. And if Dean Russell seems confident that his graduates will go on to great things, it is due in no small part to the unique nature of the college.

“We’re charged with attracting and retaining the best Hofstra students,” Dean Russell said. “All first-year students take the same classes. That establishes a strong sense of community and belonging and promotes a strong academic environment.” Students have the option of living in a residence hall set aside for Honors College. 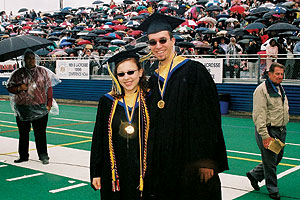 Saundra Dobbs and Tim Bishop, both 2005 graduates, met through HUHC.The couple, now married, discovered their love of travel and volunteering while at Hofstra.

All freshmen take Culture and Expression, an innovative linked pair of courses in the humanities and social sciences taught by a multidisciplinary team of hand-picked professors who design the course pairs to explore the connections between disciplines. Courses can include trips to plays and concerts, the study of music and art, guest lecturers, debates and panel discussions.

This common core curriculum – similar in concept to that which exists at other colleges such as Columbia – was an idea that Ambassador Saltzman, a Columbia graduate, proposed. The idea was to institute “some common educational experience that they would all have that was different from what prevailed in college in general, whether you wanted to be a doctor or an engineer or a poet … a civilized, creative education,” he said.

Joanne Giordano, another 2005 graduate, still remembers the impact of Culture and Expression. It was there that “you got to see the entire Honors College together. I remember that that’s where I made the majority of my friends freshmen year. It was great because you could walk into a room and know all the students by name. The Honors College program was very comfortable, and I think we all bonded pretty well.”

Giordano graduated from the School of Communication with a B.S. in TV/video/business and is currently working at American Movie Classics (AMC) as a production coordinator.

After their first year, students take courses needed for their majors. Those courses are then enriched through honors contracts they put together with their professors in which they agree to work on additional projects or papers. The program allows students to select any of Hofstra’s 130 majors and to graduate with a bachelor’s degree and Honors College designation.

Because professors and students work together to develop Honors enrichments in classes, the entire University faculty is involved in the program.

“The program required buy-in from the whole University,” Dean Russell said. “We needed the cooperation of faculty in all departments for the honors credit programs … the faculty has made this happen. Their cooperation, their belief in the goals of the program and their good humor in working with us to develop these classes have been outstanding.”

Students are also required to take one Honors College seminar in their last three years, but Dean Russell said many attend a number of seminars.

“They really feel like they’re at home when they take seminars with us,” he said. “They see people they haven’t been with since their freshman year.”

Seminars have included the historical significance of the year 1969, and astrobiology – speculative biology regarding alien species. Next year’s seminars will include one on economic forecasting with Dr. Irwin Kellner, chief economist at CBS MarketWatch and Hofstra’s Augustus B. Weller Chair of Economics.

May 2005 graduate Saundra Dobbs, a California native, said the experience of traveling to Hofstra and being part of HUHC opened her eyes to the possibility of seeing the world. “I had only left California twice before I left for college, and I decided to take a chance and move to Long Island for school,” said Dobbs, who majored in political science and psychology with minors in history and world religious studies. “I was admitted into UC Berkeley, UCLA, and USC, but Honors College gave me the biggest scholarship.”

Saundra and fellow Honors College graduate Tim Bishop spent time in Africa while still in school, volunteering with a group that educates African girls and women, provides them with job training and teaches them AIDS and malaria awareness. The couple married in September and has applied to serve in the Peace Corps. “Honors College indirectly influenced my decision to volunteer,” Saundra said. “Without Honors College I probably would not have come to Hofstra, and, as a result, would not have realized how much I love traveling.”

Joanne Giordano believes the education she received through the Honors College “taught me how to think deeper. Compared to regular classes, I definitely saw a greater level of exploration and discussion in class. I feel that the program definitely added to my education. I took a lot of honors option classes where you work individually with a teacher in any class you want. Doing that allowed me a chance to explore a subject I liked in greater depth and detail.”

It is that type of academic excellence that makes Board of Trustees Chair John Miller believe that Honors College is essential to the continued growth of the University, and a program with which he wants to be associated. “When you are talking about where to leave a mark,” he said, “I’d choose to leave it on something that brings the best of the best to Hofstra.”