The six seniors on the 2005 Hofstra Softball team may have been honored in one of the smallest graduation ceremonies in the history of the school, and that was just fine with them. 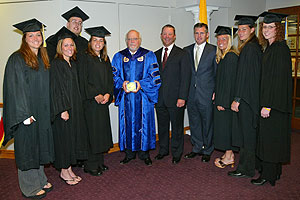 The Pride had another exceptional season on the softball diamond this spring, setting a new school record with 43 wins, while winning its eighth consecutive conference tournament title. Hofstra’s Colonial Athletic Association Championship earned the Pride a bid to the NCAA Tournament, where it proceeded to reach the regional finals for the second season in a row before falling to Alabama in the championship game.

The success on the softball field was not without a price, however, as the regional finals in Alabama were held on the same day as Hofstra’s graduation (May 22). That meant that the six seniors on the team (pitchers Callie Osborne and Adrienne Clark, first baseman Hailey Clark, outfielders Kelly Morris and Lisa Torres, and designated player Stefanie Kenney), as well as WRHU broadcaster Josh Harman, missed their graduation ceremonies back in Hempstead.

Hofstra University decided, though, that the softball players deserved to have the same experience as their classmates. The team flew back to campus from Alabama on May 23, and they were honored in a special graduation ceremony on Tuesday, May 24 at the Scott Skodnek Business Development Center. President Stuart Rabinowitz, just as he had done two days previously for the other thousands of graduates, addressed the cap-and-gown clad seniors, who were called up individually to receive their degrees in front of an audience of approximately 50 family and friends.

The smaller ceremony suited the seniors on the softball team perfectly. In fact, they had hoped all along that they wouldn’t be at the May 22 graduation.

“Last year, the seniors missed their graduation because they were at the NCAA Tournament and we had a little ceremony for them right after after the game outside the field,” said Osborne, who set a school record with 21 straight pitching victories this spring. “We said all along that we wanted to miss our graduation, too, since it would mean that we had another successful season.”

The successful season indeed came, just as they had hoped, as well as the post-game graduation ceremony with the team on the field at Alabama. The official ceremony this year on campus, though, came as an unexpected bonus, and was a moment that the seniors said they would never forget.

“I loved our ceremony,” said Adrienne Clark, who finished her pitching career with a 5-1 record in NCAA Tournament games. “In a way, this was much better than the big graduation because it was so personalized and so special. It meant a lot to all of us.”