In 2001 Hofstra University dedicated a sitting wall in our “Court of Courage” to recognize those individuals who fought for their freedom during The Warsaw Ghetto uprising of World War II. This memorial was possible because of the generosity of Mrs. Roberta Musicante Marcus ’52 and Bernard Marcus ’50. In addition to this contribution, Roberta and Bernie established an endowed scholarship and have included the University in their estate plan. 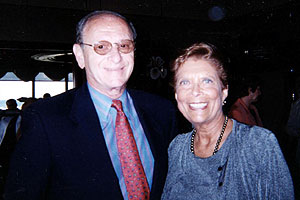 “When preparing our estate plan, our first concern was providing for our five children. Then we considered the charities that we assist with our time and financial support,” stated Roberta and Bernie. “Hofstra is one of the organizations we feel strongly about. The University provided us with an excellent education and wonderful memories. We included the University in our wills in order to help future generations of deserving students earn their degrees at Hofstra.”

While a student at Hofstra, Roberta was a member of Delta Chi Delta sorority and the Psychology Students Association. She was also active with Nexus, Hillel and The Chronicle, and worked in the office of the Dean of Students. She graduated from Hofstra University in 1952 with a bachelor of arts in psychology. From 1973 to 1998, Roberta worked as a national promotions manager for D. Klein, Inc. She is currently president of her own company, Promotional Premiums, an advertising specialties firm. Roberta is also a life member of both the National Council of Jewish Women and Hadassah.

Bernie enrolled at Hofstra at the suggestion of the late Dr. Augustus B. Weller, his father’s banker and personal friend. (Coincidentally, Hofstra’s Weller Hall was named for Dr. Weller, Hofstra trustee emeritus, in 1962) As a student, Bernie was a member of Sigma Alpha Lambda fraternity and one of the founding members of Hillel. He also served as president of the Inter-Fraternity Council. It was here at Hofstra that Roberta and Bernie met, as they both participated in some of the same student activities.

Bernie graduated from Hofstra in 1950 with a bachelor of science in business administration. After completing his military duties in 1953, Bernie assisted his father, Sam Marcus, in operating Crestwood Dairy, which had established milk delivery routes throughout Long Island. In 1956 Bernie and Sam opened a new pasteurizing plant in Lynbrook, New York. The plant was eventually sold to Redi-Whip, and Dellwood Dairy processed all the milk for the established routes.

After losing contact for more than 25 years, Bernie and Roberta were reintroduced through a mutual friend, and were married in 1976. In 1994 Crestwood Dairy was sold, and Roberta and Bernie have since spent time traveling throughout Europe, the Middle East, South America and Asia. Bernie is a member of the board of trustees of Beth Emeth Synagogue in Hewlett, New York, and is also active with the Hofstra Alumni Organization.