Mulls Over Superb 2004 Season and Future of Hofstra Soccer

Richard Nuttall will be entering his 17th season in charge of the Hofstra Men’s Soccer program in 2005. One of the longest-tenured coaches at Hofstra, trailing only Fran Kalafer (Volleyball) and John Danowski (Men’s Lacrosse), Coach Nuttall has been part of many memorable moments. But the 2004 season has to rank near the top of the list of highlights, after the Pride, seeded fifth in the Colonial Athletic Association Tournament, upset top 25 teams in #25 UNC Wilmington and #15 Virginia Commonwealth in the CAA’s opening round and semifinals, respectively, and then beat third-seeded Old Dominion in the championship game to earn the CAA’s automatic bid to the NCAA Tournament. The bid was Hofstra’s first at the Division I level, and only its second all-time. The 1968 squad qualified for the NCAA Tournament as a member of the Small College Division. But the memorable season did not end with a tournament selection. The Pride went to Seton Hall for a first-round game and beat the 21st-ranked Pirates, 2-1, to advance to the second round. While the magical season came to an end with a 4-0 loss at #7 Maryland, the success of the season and late season run will last a lifetime. Hofstra Director of Athletic Publications Len Skoros recently sat down with Coach Nuttall to discuss the 2004 season and what the future holds for Hofstra Soccer. 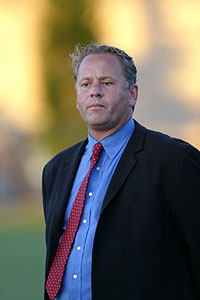 “We have a wonderful group of alumni,” said Rich Nuttall. “They are very supportive.”

Q: 2004 has to rank up there as one of your most successful seasons. Can you describe your thoughts and feelings as the team made its run to the NCAA Tournament?

RN: During the season I felt that we had a very good team and it really wasn’t coming together right away. But after the first six games, I thought we started playing quite well. As far as emotions, the first one had to be relief because I knew we had good players and they finally put it all together. From a personal point of view, it has been a long journey, and I felt that there have been other teams that should have achieved a little bit more, but it was due reward for a lot of hard work over the years. I also thought about everyone who helped get us to this point, including the current coaching staff (Brian Suskiewicz, Ed Schieferstein, Brian Dunleavy) and my former assistant, Eugene Larkin.

In a funny story, when the final whistle sounded against ODU (CAA championship game), the first thing I felt was pain. I jumped up to celebrate at the same time James Bentley did, and he caught me under the chin. I saw stars for 10 seconds, but after that it was just pure elation.

Q: Having been here 16 years, you have coached many players and I know that the alumni are a very tight-knit group, so last season was probably a thrill for them as well. Did you get a lot of feedback from past players?

RN: We have a wonderful group of alumni. They are very supportive. I think the fact that so many people came to support us against Seton Hall, and were quite vociferous and into the game, helped us tremendously. We were playing our fifth straight game on the road and we were very tired, and that support took us through that game.

The feedback we received was tremendous, not just from Hofstra alumni, but also the University and soccer communities. I couldn’t keep up with the e-mails and phone calls. After the season was over, I tried to get back to everyone, but it was a really big task.

Q: How much do you think the success from last season will impact your program?

RN: As a staff, we have been discussing this the last few weeks and feel that we need a few more years of consistent success to impact the program and attract the top players. We get good players right now, along with the occasional great player. The success of last year should help in recruiting, but it is a long process, and you have to build slowly. We have a long way to go and a lot more to achieve, and we are going to keep working hard.

Q: The now 2-year-old Hofstra Soccer Stadium is one of the nicest facilities in the Northeast. What are your feelings about the stadium?

RN: The stadium has had a major impact on the program and is a focal point for us. Just bringing recruits on campus and having them see all the people at the games, under the lights, and the beautiful turf field and stands is a tremendous help for recruiting.

Q: Frank Gorman, one of your former players, was killed by a drunk driver in 2003. Can you tell us about the plans for the Gorman Memorial Gateway?

RN: Frank was loved by all who knew him and is truly missed. He was a great representative of Hofstra and the soccer program. We would like to memorialize him and his life by building the Gorman Gateway on the northeast side of the stadium. The gateway would have a plaque area, and in the back, a garden with a patio. It will be a beautiful entrance to our stadium when it is completed, and we are looking forward to starting work on it very soon.

Q: One of the other causes that is important to you is the Barclays Cup/Sergio Villanueva Scholarship Fund. Can you explain the fund and how you got involved?

RN: Jonathan Kanovsky ’86 came to me a few years ago regarding Sergio Villanueva, a Hofstra soccer player who unfortunately died on 9/11, to see if there was something we could do to memorialize him and keep his name going. We created an endowed scholarship fund that would benefit the men’s and women’s soccer programs, but it has grown and grown into a much bigger event. Barclays Capital is a major contributor to the fund, and they bring a team over from England each year to compete against the FDNY and NYPD soccer teams, as well as a team from Barclays New York office. We hold a youth soccer clinic in the morning and then the Barclays Cup Tournament in the afternoon, and it is always a great day of soccer for a good cause. I really need to thank Jonathan and Joe Brosi, the FDNY coach, for all their hard work in organizing the tournament and helping the fund.

Q: Is there anything that you would like to say to fans of Hofstra Soccer?

RN: I want to thank everybody for their support over the years. This has been a major part of my life, and there haven’t been many days when I didn’t want to come to work. We just want to keep representing the University well and win as many games as possible. I also want to say that while we have had a lot of success on the field, we have also been successful off the field. So many of our former players are doing great things in life, and I am so proud of them and the family atmosphere that we have cultivated here at the University.