It is the view that is most imposing when entering Mark Bracco’s office in one of the ABC buildings on New York’s Upper West Side. A 1992 Hofstra graduate and the newly named director of specials for ABC, Mark has a corner office that looks down on Lincoln Center and Columbus Avenue. He takes time to respond to questions during Upfront Week in New York, when the networks announce their fall prime-time lineup. 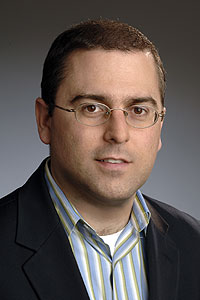 Mark’s journey to his new office has taken him through some of the television industry’s most interesting trends, including the rise of reality television and the morning show wars. He has now landed a key position at a network on the rise. It is Mark’s drive and determination – whether he was a St. Francis Prep student taking AP courses, a Hofstra student seeking real-world experience or a young professional looking for the next break – that guaranteed his success.

“I wanted to get a jump start on the job market. This business is all about getting a job, learning the business outside of the classroom,” said Mark. An internship at “Live with Regis and Kathie Lee” led to his first paid position in the publicity department atTV Guide, helping with the magazine’s 40th anniversary events. “I graduated on a Friday and started work on a Monday.”

Mark did well at TV Guide, rising to senior publicist in four short years. But he still yearned to work in television. “At TV Guide, I met a lot of people in the industry, I did segments with ‘Good Morning America,’ ‘Entertainment Tonight’ and got to know the producers.”

When a new show called “Access Hollywood” came to pitch TV Guide prior to its premiere, it was Mark who pitched them, landing a position as a second producer out of New York, covering the television industry. He was on his way. “I was 25 years old, not married. I figured now is the time to take a chance. Over the years a dozen shows had come on to compete with ‘Entertainment Tonight,’ and all of them failed. But I figured, what the heck? Now, of course, ‘Access Hollywood’ is celebrating its 10th anniversary this fall.”

After three years on the air, ‘Access’ experienced a leadership turnover. Rob Silverstein, its new executive producer, asked Mark to move to Los Angeles as senior producer in charge of the TV unit. Mark and his wife “moved out there, stayed for three years and loved it. We had our first child there. [In LA] you can walk around in shorts and take your kid to the park in February. It was great. It’s the center of the entertainment universe. I met so many people, and the show found its voice under Rob. It was fun and competitive and just an exciting, great time.”

Mark experienced the reality show phenomenon ahead of the curve, first hand. In March 2000 Jeff Probst, who had been the original New York reporter for Access Hollywood, e-mailed some former colleagues that he was “going to Borneo to shoot this new show called ‘Survivor,’ a cross between Robinson Crusoe and an Agatha Christie book.”

“Access” ended up airing a segment on the “Survivor” auditions. Mark says, “A couple of us tried to convince Rob to go shoot ‘Survivor’ while it was in production. ‘Access’ had a small budget, and the reaction was ‘this show is going to air over summer and no one is going to watch it.’ But ‘Access Hollywood’ was doing focus groups, and one of the pieces was about the (‘Survivor’) auditions. That segment was one of the highest testing pieces in the show. So after we saw the tests, our crew spent a week in Borneo for one entire show of challenges.”

After “Survivor” began airing, and it became a phenomenon, “Access Hollywood” was the only show with production footage. “CBS didn’t even shoot an electronic press kit … ‘Access’ went eight episodes in, when half the people had been eliminated,” said Mark. “CBS called ‘Access’ a few weeks in and asked us to stop showing footage, because Web sites had started popping up saying ‘if you watch ‘Access Hollywood’ you can figure out who’s missing, and who’s been eliminated.’ I am very proud of the fact that we championed going to shoot this. Later when Mark Burnett wrote a book about his experience, he mentioned how ‘Access Hollywood’ supported the show.”

It was soon after that Mark and his wife, Jamie, began talking about returning home to New York. “At the time there wasn’t anywhere to move up on the show and I started to put out feelers. Then September 11th happened, and we really wanted to come home to our family.” When offered the job of entertainment producer at “Good Morning America,” Mark and the Bracco family returned to New York so Mark could begin “one of toughest jobs in the news business” as a morning show producer.

During his three years at “Good Morning America” (GMA), Mark produced all entertainment segments, including movies, concerts and music. “I very quickly saw that the competition between ‘Access Hollywood’ and ‘Entertainment Tonight’ was nothing compared to the morning shows, which are really brutal and competitive. The stakes are so high, there is so much ad revenue involved. It was a tough, rude awakening.”

Mark’s day often started as early as a 6 a.m. rehearsal when there was music on the show, and often lasted 14 or 15 hours. As brutal as it was, he was successful enough to be tapped to be director of specials for ABC in January of 2005.

While Mark still helps GMA for big events, concerts and movies, he is now charged with leading ABC’s annual specials and events, such as the Oscars and the American Music Awards. According to Mark, “I worked at the Oscars as a producer for ‘Access’ and ‘GMA,’ but in this new capacity, I sit in on rehearsals with a different perspective on things. … It’s interesting to step back. Now I am working with producers to make sure that the vision for the show is what the network will want and what is right for the network.”

During the recently aired “Nick & Jessica’s Tour of Duty,” he got to see firsthand how the ABC brand affects the programming. “ABC is on an upswing and doing so well. The unit I work in is Alternative Series and Specials, including the reality shows. When we did the Nick & Jessica special, we brought guys from Iraq to the taping in Germany, surprised them with a reunion with their families. That feel-good, ABC brand … it’s about helping people, making their lives better.”

While Mark remembers that an on-camera reporting assignment “taught me so quickly that I was not meant to be on camera,” his Hofstra experiences included a stint as executive producer for “News & Views,” working with instructor Randy Hillebrand. Friends included colleague Jenny Serravalli-D’Attoma ’92, now senior producer for CNN Headline News “Showbiz Tonight,” whose daughter and Bracco’s son Kyle were born a day apart. “Jenny and I are still very close.”

It was a Hofstra connection that led Mark to one of his life’s most significant moments. Out one night in the summer of 1996 at Match on Mercer Street with his suitemate and post-college roommate Jack Hughes ’93 (now an executive with Deutsch Advertising), both Mark and Jack met their future wives. Mark married Jamie in 1998, and the Hughes dated for six years before marrying. “We joke that we had both of our kids before they got married, and we met on the same night.”

Mark’s advice for those starting out in the business? It is no surprise that he recommends internships. Mark says “There are lots of Hofstra interns at GMA. When interns ask for advice, I tell them ‘just don’t leave.’ The few who listen stick around and work for free some more, but eventually come on as freelancers and eventually get hired.”

Good advice from someone who knows how to make the most out of an internship.