Together, Don Conway and Ken Kamen feel their accomplishments are a testament to the University.

Though they graduated 18 years apart, the career paths of Don Conway ’63 and Ken Kamen ’81 seem to have been destined to cross. Today both men are managing directors at the Princeton, New Jersey-based Mercadien Group, a financial firm billed as “entrepreneurs serving entrepreneurs.” Indeed, the name “Mercadien” – inspired by the mapping term Mercator (a Flemish cartographer) – gives the sense that these two gentlemen are exactly where they belong: working with each other and helping business owners find direction in a competitive market. 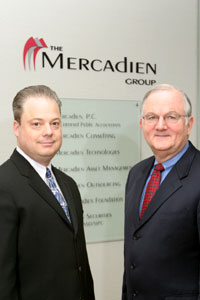 Both Don and Ken remember their Hofstra years fondly, but neither executive initially knew about their shared Hofstra past. “We went out to a get-to-know-you lunch and it just came up. Then we started playing `remember this and that,'” Ken said.

Don Conway, a specialist in securities fraud and also a principal in Mercadien’s CPA unit, came to Mercadien in 1994 with a daunting list of career highlights. The former president of Six Flags Great Adventure and executive director of the U.S. Tennis Association, Don was involved in the negotiations between the United States and the former Soviet Union that led to the first Goodwill Games, held in the U.S.S.R. in 1986. The brainchild of cable mogul and CNN founder Ted Turner, the Goodwill Games were designed to improve East-West relations in the aftermath of President Carter’s pullout of the U.S. team from the 1980 Summer Olympics in Moscow and the Communist Eastern bloc’s boycott of the 1984 Summer Games in Los Angeles. Don said from that experience, “I gained an appreciation that athletic competition can bring people together and settle differences.”

Don’s second most memorable career achievement actually took place over seven years. In mid-1997 Conway was recommended by the Securities & Exchange Commission to become Chapter 11 trustee for the bankruptcy estate of Robert E. Brennan, whose First Jersey Securities Inc. sold penny stocks. After the SEC won a $75 million judgment against Brennan, he filed bankruptcy. Don described that case as “a rewarding experience” because he has tracked down millions of Brennan’s assets from as far away as Gibraltar, Ireland and the Isle of Man and has distributed $56 million to victims of Brennan’s complex stock schemes.

Don says this case consumed “probably 90 percent of my time over the past seven years.” Spurred by suggestions from friends, Don is now thinking about writing a book on the Brennan case. Some have said it could even be an interesting movie idea in the Catch Me If You Can mold, though Don concedes the case is “pretty complicated.”

Don recently had the opportunity to become reacquainted with both Hofstra and his grade school and high school classmate, the University’s Vice President for Development Michael D’Amato ’68. Conway said “Mike invited me back to see Hofstra play St. John’s, and we reconnected after all these years.” The last time they saw each other was years ago when Michael played on Joe Namath’s Super Bowl-winning Jets team. In addition to their shared educational experiences, Don and Michael also have a shared sports connection. In 1973 Don – then controller with the New York Mets – “developed a software program for the Jets that analyzed the success of various running and passing plays. They used that for many years.”

Ken Kamen characterizes his Hofstra experience as “some of the best years of my life.” He recalled that his dorm window looked out on the Mitchell Airfield runway. “I guess that makes me sound old!” He shares alumni status with his father, Irwin, Class of 1955, and his niece, Meredith, is a current student. While majoring in finance at Hofstra, Ken interned at a brokerage house in Westbury, New York, where he received his stockbroker’s license. His student routine included morning classes, then working at the brokerage from 10 a.m. to 4 p.m., and more classes in the evening.

Ken Kamen said one of the highlights of his career so far has been “building a strong regional brokerage firm, Princeton Securities Corp., and then selling it. We had thousands of clients and raised capital for lots of small companies.” He ran Princeton Securities from 1988 to 2001, “then sat out a non-compete clause.”

Ken also values the opportunities he had to work with Congress. He consulted with members of the U.S. House Energy and Commerce Committee and the U.S. House Ways and Means Committee. For the latter committee in 2002, he chaired a business advisory group on accounting and auditing reforms in the wake of the Enron Corp. bankruptcy. Ken also testified before the House Subcommittee on Finance about “the effects of reform on the smaller issuer marketplace.”

Together, Don Conway and Ken Kamen feel their accomplishments are a testament to the University. The skills and experience they received at Hofstra have been beneficial to Mercadien, which has an ongoing mission of giving back to the community so that future business leaders may someday write their own success stories.

Power of the Poem