Curtains will soon go up for an ambitious summer theater program presented by both Hofstra USA Productions and The Gray Wig alumni theater group.

Hofstra USA Productions will present “A Season of Theatrical Portraits,” starting with the world premiere of Lo Bianco’s La Guardia, starring Tony Award nominee and Obie and Emmy Award-winning actor Tony LoBianco. The show, to be presented at Monroe Lecture Center Theater from June 10 to 19, is adapted from the play Hizzoner! by Paul Shyre and features direction by LoBianco and Bob Spiotto ’84, Hofstra’s artistic director for community arts programs and executive director of Hofstra USA Productions.

July 15 to 24 features the Irving Berlin classic Annie Get Your Gun at the John Cranford Adams Playhouse, followed by the East Coast premiere of The Cat’s Meow, directed by Ed Dennehy ’68, August 12 to 21 at Monroe Lecture Center Theater. Tickets for Hofstra USA Productions’ summer series are available individually and by subscription.

The Gray Wig joins the fun with Neil Simon’s Biloxi Blues from June 3 to 19 at the West End Theatre. The final show of the summer is Ragtime: The Musicalat the John Cranford Adams Playhouse. All net proceeds from Gray Wig performances benefit the Hofstra Scholarship Fund.

On Thursday, May 26, 2005, Hofstra celebrates its 2005 Gala Ball. This year’s honoree is Robert Wood Johnson, IV, chairman and chief executive officer of The Johnson Company and New York Jets, LLC.

The Gala welcomes more than 1,000 guests and is one of Hofstra’s more significant annual fundraisers, raising critical endowed funds.

This annual event will be held at the Hofstra University Arena and it will be filled with much excitement. For the first time a raffle drawing is offered, with prizes including a transatlantic cruise for two aboard the Queen Mary II, from New York to Southampton, England. The trip features a three-night-stay at the Westbury Mayfair Hotel, located on the famous Bond Street in London and a first-class return trip to New York courtesy of American Airlines. Other prizes include two tickets to the 2006 Super Bowl, including air fare and hotel accommodations, and an elegant jewelry piece, courtesy of Fortunoff.

As in the past net proceeds raised from the Gala will benefit the Hofstra University Endowed Scholarship Fund.

For more information about sponsorship/underwriting opportunities, journal reservations, ticket and raffle sales, please call the Office for Development at (516) 463-5251.

On February 14, 2005, Hofstra University President Stuart Rabinowitz announced Aaron D. Twerski’s appointment as the next dean of Hofstra University School of Law. Professor Twerski, who was selected after an extensive national search, will succeed Interim Dean Alan Resnick on July 1, 2005. Professor Twerski, who is currently the Newell DeValpine Professor of Law at Brooklyn Law School, served as a member of Hofstra’s law faculty from 1972 until 1986. 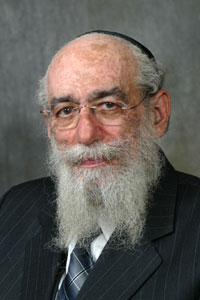 “Professor Twerski is an ideal choice to lead our excellent law school to even greater stature,” said President Rabinowitz. “He is a nationally and internationally renowned scholar and a revered teacher, who possesses tremendous energy, leadership ability, enthusiasm and integrity. Professor Twerski brings the unique combination of an in-depth knowledge of Hofstra’s Law School and many of its alumni as well as the perspectives on legal education that he acquired in teaching at several other distinguished institutions.”

Professor Twerski is a prolific scholar of international renown who is the co-reporter for the American Law Institute’s Restatement of the Law Third, Torts: Products Liability, for which he received the prestigious designation of “R. Ammi Cutter Reporter.” He is the author of five books and more than 70 articles in scholarly journals about torts, products liability and conflict of laws. A professor of law at Brooklyn Law School since 1986, he previously taught at Hofstra University, where he also served as interim dean from 1977 to 1978 and as associate dean from 1975 to 1977 and at Duquesne University School of Law from 1967 to 1971.

He earned a bachelor of science in philosophy from the University of Wisconsin – Milwaukee, where he was a member of the Phi Eta Sigma National Honor Fraternity.

“I am delighted to return home to Hofstra University’s School of Law, where I spent some wonderful years working with its excellent faculty and engaged students,” said Professor Twerski.

Professor Twerski is a leader of the Hasidic community in New York City, and is the first to be appointed dean of an American law school.

On March 20, 2005, the American Chamber Ensemble (ACE), which has its residency at Hofstra, presented a 40th Anniversary Concert. Music Department faculty. Directors of the ensemble, Naomi Drucker ’57 and Blanche Abram, were joined by Marilyn Sherman Lehman ’75, piano, Patricia Spencer, flute, and the ACE String Quartet at Monroe Lecture Center Theater.

In 1965 ACE directors Naomi Drucker, clarinetist, and Blanche Abram, pianist, were young mothers and musicians determined to continue making music despite family obligations and society’s expectations. In a very different world from today, with a strong sense of place and the need to perform close to home, their musical journey began with performances in libraries and churches and for civic organizations. ACE brought imaginative concerts for clarinet and/or piano with strings, woodwinds and voice to an audience eager to hear music in a local venue. 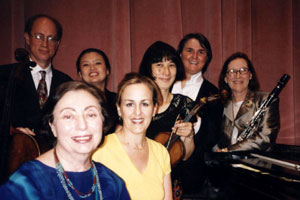 Now in its 40th year, ACE has garnered a superb reputation and loyal audience for its concerts, recordings, commissions, world premieres and support of American music and Long Island composers.

In 1978 ACE began a residency at Hofstra University, which continues to this day. Because ACE is Long Island-based, each performance since 1980 has included works by local composers. Although venues have included the National Gallery of Art in Washington, D.C., Weill Hall at Carnegie Hall, 92nd St. Y, CAMI Hall, Christ and St. Stephen’s Church, the Nassau County Museum of Art and prestigious universities, the American Chamber Ensemble considers Long Island audiences to be at the core of its success.

As part of the 40th anniversary celebration, Elysium Records has released The American Chamber Ensemble Plays Peter Schickele, four chamber works of this American master, who conducted and participated in the recording sessions. Other ACE CDs include “American Clarinet Treasures” (Elysium Recordings), “Herbert A. Deutsch Woman in Darkness” (4Tay) and “Albert Tepper: Duos and Trios” (4Tay). Both Herbert Deutsch ’56 and Albert Tepper are Hofstra University professors emeriti of music.

Vincent Federici ’99, who holds a bachelor’s degree in history and elementary education from Hofstra University, turned his fondness for programming and student development into a career in higher education.

After graduating from Hofstra, Vincent served as coordinator of residence education and assistant coordinator of judicial affairs, and later as assistant director of freshman admission at Roger Williams University in Rhode Island.

In 2003 Vincent returned to Hofstra as assistant dean of students and director of judicial affairs. “Judicial affairs gave me the opportunity to educate students about the value of a Hofstra education and the vast resources the University affords.” Through his work in the Dean of Students Office, Vincent has built a strong rapport with hundreds of students. “We are confident that Vincent’s experience in student affairs will strengthen our retention efforts, and at the same time, help cultivate tomorrow’s Alumni Organization leaders,” says Margaret Shields, executive director of alumni relations. “Vincent has already begun to motivate and energize regional chapters nationwide, helping the Alumni Organization’s impact throughout the country.”

Under Vincent’s leadership, Alumni programs such as Hofstra CAN! (Career Assistance Network), HART (Hofstra Alumni Recruitment Team), and GOLD (Graduates of the Last Decade) continue to thrive and expand. In addition, regional chapter development throughout the United States will be a primary focus for Vincent.

Noel Correnti, a graduate of the University of Rhode Island (B.A. ’99), comes to Hofstra University with knowledge and experience in the areas of development, donor relations, special event coordination and volunteer management.

Following her graduation, Noel was a program coordinator for the Muscular Dystrophy Association, where she organized community fund raising and disability awareness events. She has also served as a capital giving assistant and as a class campaigns associate for Brown University, where she worked on prospect research and special events, and reunion class gift programs, respectively.

As associate director of alumni relations, Noel’s responsibilities include reunions and homecoming, overseeing the Alumni Organization’s more than 35 affinity groups, class gift campaigns, and alumni products and services. Noel also serves as editor for the AlumNet e-newsletter and as the assistant editor to the Hofstra Update.

“Noel brings such a well-rounded skill set to the Office of Alumni Relations,” said Margaret Shields, executive director of alumni relations. “She has quickly become an asset to our team. We are so fortunate to have her on board and benefit from her experiences.”