Abdul Marwaan Macan-Markar ’87 came to Hofstra from Sri Lanka, and this international student quickly made the University his second home, making many lifelong friends and acquainting himself with administrators and faculty. He was well-known and popular on campus, leaving an impression that has lasted to this day. The tragic tsumanis that hit South Asia in December 2004 left many Hofstra classmates who had known Abdul concerned for his safety. Now a working journalist, Abdul not only survived the devastation, but he is covering it for the foreign news agency Inter Press Service. 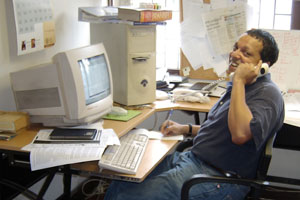 Abdul at the Inter Press Service bureau in Bangkok.

Abdul grew up in Colombo, Sri Lanka, “A city by the sea. It was and still remains a small town when compared with some of the major capitals of the world. But that is its charm,” he says.

His decision to come to America to study at Hofstra “had to do with my stumbling into the world of journalism soon after leaving high school. I got a job as a reporter on a daily newspaper in Sri Lanka and enjoyed it so much that I felt that a degree in journalism was in order. Thankfully, my father backed the idea. When he realized that Sri Lankan universities did not have degree programs in journalism, he suggested I look elsewhere. America naturally came to mind, since I believed at the time that it had the best media culture.”

Abdul goes on to say that coming to Hofstra as a freshman in 1983 “was the beginning of a new life for me, since that was my first trip to America. Yet I had little trouble adjusting, since language was not a barrier, and it was a country that I had become familiar with through films, books and music. And then there were the friends I met, some of them on the staff of The Chronicle at that time, who were warm and supportive.”

Abdul dual majored in journalism and political science. “There were professors in these departments who were truly inspiring,” he says. “The ones who stood out were those who pushed me to explore new ways of interpreting the issues we addressed at the time.” Among them were Political Science Professors Herbert Rosenbaum, Mark Landis, Bernard Firestone, William Levantrosser and Paul Harper.

Abdul worked his way through The Chronicle hierarchy to become the paper’s first foreign editor-in-chief in the fall of 1985. His news editor, Jo-Ann (Hirschel) Konieczny ’88, says, “I think [Abdul] is so well remembered because of the combination of his intelligence and friendliness. I thought he worked well with both the administration and the students and knew how to keep a story fair and balanced.”

She continues, “As an editor-in-chief he had the managerial gift that many of us take a lifetime to learn. He let each section editor do their job, make their own mistakes and learn by them. He also made working late nights at The Chronicle a real social experience.”

Abdul’s time became consumed with the newspaper. “I had little time for other groups since work at The Chronicle was so absorbing and it was an extraordinary education in itself. My year as the editor began on an exciting note – the entire faculty went on strike the first week. Then there were protests to get the University to withdraw investments from companies doing business with the then-apartheid government of South Africa.”

While Abdul attended graduate school at Hofstra, he served on staff at the University as a resident director. Vice President for Campus Life Holly Seirup was director of residential life at that time and remembers, “He had a great smile and was a hard worker. I have gotten to know many wonderful students through the years, but Abdul always stood out as someone special. To this day I think about him when I hear about events in Sri Lanka. He simply was a wonderful presence and brought a great international perspective to campus.”

After graduating with a master’s degree in humanities, Abdul’s interest in human rights remained strong upon his return to Sri Lanka. “During most of the 1990s I worked for two Sri Lankan newspapers writing stories about the country’s human rights violations. These abuses stemmed from the bloody ethnic conflict being waged in the north and east of the island. It meant filing dispatches from villages and towns that had been bombed and brutalized.”

In 1999 Abdul landed an opportunity to work as a foreign correspondent in Mexico City for Inter Press Service (IPS), a news agency, he says, “that tries to give voice to developing country issues.” Two years later he was assigned to his current post, as the Asia correspondent for IPS, based in Bangkok.

However, when the earthquake and tsunamis hit Sri Lanka on December 26, 2004, Abdul was home in Colombo. “It took me an entire day to realize the sheer scale of the disaster. There were no parallels to be guided by. The devastation across the country was shocking. It was such a terrible blow to a country that had been shaken apart by bombs, ethnic riots and a brutal war.”

“Finding words to describe the scene in village after village – all flattened, with hundreds killed – was the toughest. I still struggle when I head to the tsunami-battered coastlines.”

As Sri Lanka and other countries that were hit so hard by the natural disaster start the rebuilding process, Abdul himself is carrying on with his career and personal life. This winter he got married. He met his Japanese wife, Naoko, in Bangkok. Like him, Naoko is active in rectifying human rights violations. She works for a non-governmental group that clears landmines along the Thai-Cambodian border.

Power of the Poem